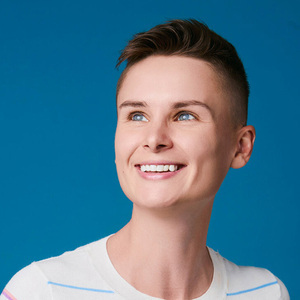 Ashley Gutermuth is a New Jersey-based actress, voice-over artist and stand-up comedian. She has appeared on ‘The Tonight Show’ with Jimmy Fallon where she was chosen by Jerry Seinfeld to win the ‘Seinfeld Challenge.’ In 2021, Ashley won the headliner category of the US Comedy Contest.

Ashley has performed for The World Series of Comedy, The New York Underground Comedy Festival and The North Carolina Comedy Festival. She has also appeared on shows with Chris Kattan (SNL) and Steve Hytner (Seinfeld) among many others.

Ashley is married to a career Air Force reservist, and she's rapidly building an online following with her unique take on spouse and military humor, and she's carving out a name for herself with her inside-military jokes.

When Ashley is not performing stand-up or voice-overs, she is usually running and has a daily running streak that spans over six years. She has run at least one mile a day since 1.26.2015, and during her runs, she picks up litter because she was tired of her arms just going along for the ride. Ashley posts running tips and other comedy videos on her social media channels, which have over 50 million views!