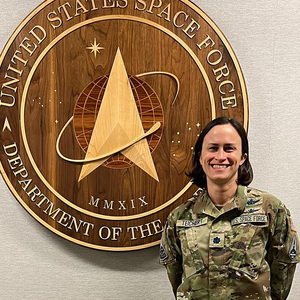 Lt. Col Erika Teichert is a U.S. Space Force Guardian, currently serving in the Pentagon as the Aide-de-Camp to the Chief of Space Operations at United States Space Force.

Teichert grew up in southern California in a family with rich military history. Her father served in Vietnam as an Army artillery officer and the National Guard. Her stepdad served in the Air Force as a Vietnamese linguist. Her uncle was an Air Force C-130 pilot in the Air Force, her great-uncle served in the U.S. Navy and her paternal grandfather was in the German Navy during WWII. Erika is a fifth-generation commissioned officer.

Prior to the Space Force, Teichert was a U.S. Marine, serving as a Communications Officer stationed on Okinawa, Japan, Marine Corps Recruit Depot Parris Island, S.C; and twice at Camp Pendleton. She is currently in the midst of her second tour at the Pentagon. She served her first full tour as a Marine, but transferred to Space Force in January 2022, and will finish out her second Pentagon tour as a Guardian.

Teichert earned a Master’s Degree in Space Systems Operations from the Naval Postgraduate School in 2016, which launched her career in the space business. She participated in the Defense Advanced Research Projects Agency (DARPA) Service Chiefs Fellowship. She lives in the DC area with her husband, Dan, a former Marine infantry officer and freelance newspaper reporter.