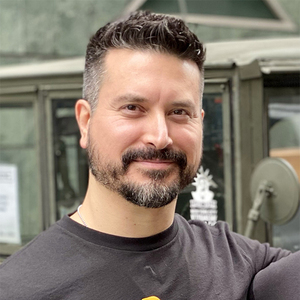 In 2016 Hertell’s cousin, U.S. Air Force Senior Airman Robert Dean, died by suicide. After Dean’s death, Hertell became acutely aware of the epidemic of veteran and active-duty military suicides and spent the next year researching and contemplating how he could make a difference.

In an effort to help remove the stigma of suicide and mental health, Hertell decided to create a symbol for Americans to rally around and to honor and remember veterans and active-duty military lost to suicide: the Suicide Awareness & Remembrance Flag, or S-A-R Flag.

“By having a tangible symbol, we elevate this issue in the public consciousness, and we can talk about Veteran suicide, thereby taking away the stigma associated with it.” Hertell says. “And by normalizing an otherwise taboo subject of mental health among Veterans and Active Military, we will allow them to seek out the care they need without judgment. Suicide is preventable, and it’s up to us to do something about it.”

Hertell has devoted his life to reversing the veteran and active-duty suicide epidemic, and he believes that removing the stigma associated with mental health and veteran and active-duty veteran suicide is where the process begins. His immediate mission is to have the SAR Flag officially recognized by Congress, similar to the POW flag, and to fly the SAR Flag over the White House and the Capitol.

Hertell is also working with the State of New York State and the federal government to annually recognize September 22 as “Veterans Suicide Awareness & Remembrance Day.”

Hertell lives and works in New York. He is married, the proud father of two and is an active member of Glenwood Landing Post 336 in Glen Head, N.Y.