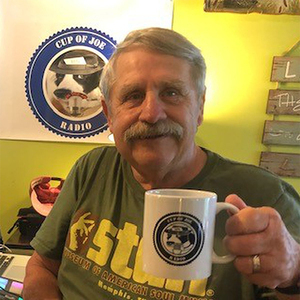 Mike Spotswood is a U.S. Marine Corps veteran who served from 1964-68, including 19 months in Vietnam with 2nd Force Recon Company, 1st Air Delivery. His tour of duty included several combat jumps and patrols with Special Forces.

After his service, Spotswood worked worked at AFN Armed Forces Network Frankfurt Germany for 3 years and in commercial television for 20 years. He then worked as a DoD employee and retired from the Army War College Gaming Center as the Visual Information Manager.

After his retirement from AWC, Spotswood leaned into his passion for veterans advocacy, and started a radio show with the mission to heal through the power of music. Cup of Joe Radio airs weekly from 4pm-6pm Eastern on Radio Free Rochester, WFRZ 106.3 and worldwide on tunein.com. The show also airs weekly on Wreaths Across America Radio via iHeart Radio or TuneIn from 4pm-6pm Eastern on Fridays and Saturdays.