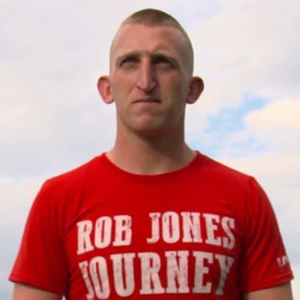 Rob Jones grew up on a farm in the small town of Lovettsville, Va. He graduated from Loudoun Valley High School in 2003, and from Virginia Tech in 2007. During his junior year at Virginia Tech, he joined the Marine Corps Reserve as a combat engineer at Bravo Company, 4th Combat Engineer Battalion in Roanoke, VA.

Jones deployed to Habbaniyah, Iraq in 2008, and again to Delaram/Sangin, Afghanistan in 2010. During his deployment to Afghanistan, while operating as a part of a push into Taliban territory, he was tasked with clearing an area with a high likelihood of containing an IED. It was in this capacity that he was wounded in action by a land mine. The injury resulted in a left knee dis-articulation and a right above knee amputation of his legs.

Jones was initially taken to the National Naval Medical Center in Bethesda, Md., for the initial phases of recovery, and then transferred to Walter Reed Army Medical Center for rehabilitation. At Walter Reed, Jones was fitted with prosthetics learned how to walk with two bionic knees. He also learned how to use his prosthetics while riding a bicycle, running, and rowing, and eventually decided to train for the 2012 Paralympics.

After being honorably discharged from the Marine Corps in December 2011, Jones moved to Florida to train with his rowing partner, Oksana. The pair won the U.S. Rowing trunk and arms mixed double sculls trial to earn a spot on the U.S. Rowing national team. They went on to win the final Paralympic Qualification Regatta in Belgrade to qualify for the Paralympics. The team then moved to Charlottesville, Va., to continue training and in September 2012, they brought home a bronze medal from the Paralympic Games. In 2013, the followed up with a 4th place finish in the 2013 World Rowing Championships.

On October 14, 2013, Jones began a solo supported bike ride across America. The journey began in Bar Harbor, Maine, and ended at Camp Pendleton, Calif. The ride was 5,180 miles long and completed on April 13, 2014, 181 days after it began. Over the course of the ride, Jones and his team raised $126,000 for the Coalition to Salute America's Heroes, the Injured Marine Semper Fi Fund, and Ride 2 Recovery, three charities which aid wounded veterans.

In the fall of 2017, Jones completed the challenge of running 31 marathons in 31 days in 31 different cities. He began on Oct 12 in London, and ran a 26.2 mile race each day across the UK, Canada and United States, finishing on Nov 11 in Washington, D.C. His team raised over $200,000 for the Coalition to Salute America's Heroes, the Injured Marine Semper Fi Fund, and the Stephen Siller Tunnel to Towers Foundation.

Jones is a member of American Legion Post 295 in Middleburg, Va., and has a wife, Pam and a son, Harry.