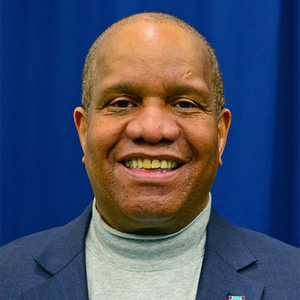 A native of Detroit, Michigan, Master Chief Patton enlisted in the U.S. Coast Guard in June 1972 and retired after more than 30 years of active service. He served as the Eighth Master Chief Petty Officer of the Coast Guard (MCPOCG) from May 1998 until his retirement in November 2002.

He began his career in the occupational rating as a Radioman, and seven years later changed over to Yeoman. He has served afloat tours on USCGC DALLAS (Governors Island, N.Y.), USCGC BOUTWELL (Seattle, Wash.), and USCGC MAKO (Cape May, N.J.). His shore assignments include, Training Center Petaluma, CA (Radioman School); Group/Air Station Detroit, Mich.; Recruiting Office Chicago; Ninth Coast Guard District Office Cleveland, Ohio; and two separate tours at Coast Guard Headquarters Washington, D.C. Prior to selection as MCPOCG, he served as the Command Master Chief for the Coast Guard Atlantic Area. During this assignment he was the senior enlisted advisor to Joint Task Force-160, during Operation Support Democracy, which was the largest alien migration operation in history.

All of Master Chief Patton’s college education was earned while on active duty. He received his Doctor of Education degree from the American University, Washington, D.C. His dissertation was based on the development and implementation of the Coast Guard Enlisted Evaluation System. He earned a Master of Arts degree Counseling Psychology from Loyola University, Chicago, IL; and a Bachelor of Arts degree in Communications from Pacific College, Angwin, CA. He is a graduate of the U.S. Coast Guard Chief Petty Officer Academy, U.S. Army Sergeants Major Academy (with distinction), and the Department of Defense Equal Opportunity Management Institute.

Master Chief Patton accomplished the rank of Eagle Scout and was also a former Naval Sea Cadet during his high school years. He was selected as an Olympic Torchbearer for the 2002 Winter Olympics. In 2019, he was inducted in the Michigan Military Veterans Hall of Honor; and received an honorary doctorate in Public Service from Southern New Hampshire University.

Currently, he is Senior Vice President for Leadership Development with NewDay USA, as part of the company’s ‘Character Driven Leadership’ program. He is also an adjunct faculty member at Northeast Maritime Institute College of Maritime Science, teaching Leadership and Ethics. He is actively involved with a number of other public service and nonprofit organizations serving on boards with the National Coast Guard Museum, U.S. Naval Sea Cadet Corps and the Uniformed Services Benefit Association.

Master Chief Patton is a Life Member of the American Legion, currently a member of Post 67. Bridgeton, Maine.