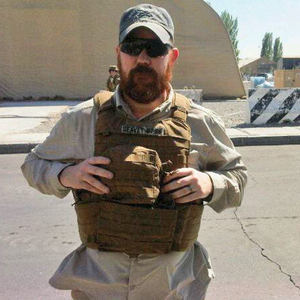 Mark grew up in Maine and Massachusetts before deciding to move south and attend The Citadel, the Military College of South Carolina. Following graduation he decided not to go into the military despite having four years of ROTC and moved to Washington DC where he worked for various non-profits.

Looking for some adventure he enlisted in the Infantry in the Reserves and later National Guard. He deployed to Bosnia Herzegovina in 1997 as part of the first call up of combat arms units of the National Guard since the Vietnam War.

On a lark he took the Law School Admission Test in 2000 and began law school at Antonin Scalia Law School “to prove any random infantryman can become a lawyer.” In the latter half of his second year he dropped out to volunteer for service in Afghanistan as an infantry squad leader, and received his Combat Infantryman’s Badge.

Since returning from that deployment he finished law school, founded a veterans organization, passed the bar exam, got married and now has three young children.

He has worked for The American Legion since 1998, working his way from VAR to Legislative and then to the Media & Communications Division. He has appeared on CNN, FoxNews, MSNBC and a host of other channels as a war reporter and an expert on “Stolen Valor.” His articles appear in The American Legion Magazine and the Legion’s blog at burnpit.us.